The Chinese word 頭 tóu (or the unrecognisable 头 tóu as a simplified character) means “head”. In Go discussions, this can refer to someone’s actual head or the head of a group.

What the Hades is the “head of a group”?

Generally, it is the area or direction a group is heading towards. Below are a few examples from games I recently reviewed:

In this game, White is currently attacking Black’s groups. White jumped at 1 to seperate the enemy forces and Black got the tiger at 2.

How is the head situation now?

The tigermouth significantly increased the scope of Black’s group’s head. We can say “Black’s head is quite unimpeded”. (頭很暢/头很畅 tóu hěn chàng)

White’s group, on the other hand, has to bonk its head to that of Black’s corner group. “White’s head is narrow.” (頭很窄/头很窄 tóu hén zhǎi) 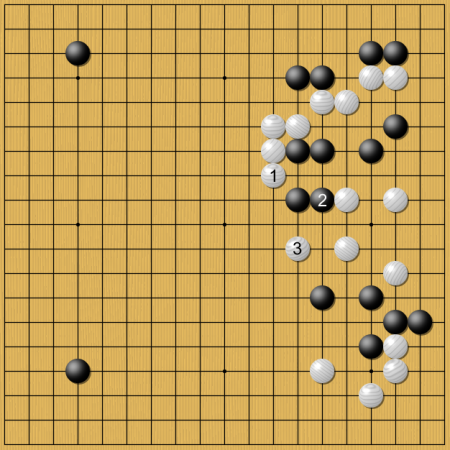 White definitely should have exchanged nobi 1 before jumping 3.

This would dramatically turn the head situation in White’s favour.

No matter what Black does now, Black cannot achieve the same result as before. 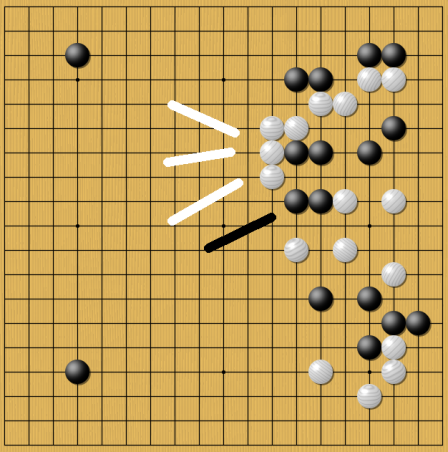 This way White widens his own group’s head, shining onto and half-claiming the no man’s land on the left side.

Black’s head, even with another move, gets tilted into a cramped road.

What a drastic difference.

That said, not only running groups have heads. The concept of a head is not limited to the immediate area of play.

The joseki in the upper left corner is a typical case of a soft head.

Due to the flaws in Black’s shape, Black’s advance towards the centre is constricted without White having to do anything.

I tried to visualise this with curved lines and hope it makes sense.

To put it in a sequence, after pushing at 1, Black might not dare hane 4 for fear of the cut at A.

So if Black jumps at 3, White can advance his head at 4 and turns 3 yet again into a soft head.

In another example, White protected the ladder with the tsukenobi 1 and 3.

This seems to be quite efficient. However, there is still bad aji in the shape and we notice that White’s centre head is rather soft.

I suggested that White cleanly take the stone.

This way, with the marked extra liberty, White gets a hard head towards the centre which automatically also tilts Black’s head back.

I judged the head difference to be more valuable than the extra points White surrounded in the game.