Finally I get to post something about the congress…

In the quarterfinal and minifinal games, I played a move that the kibitz seemed to be curious about. In both instances, that move gave me a fine result. 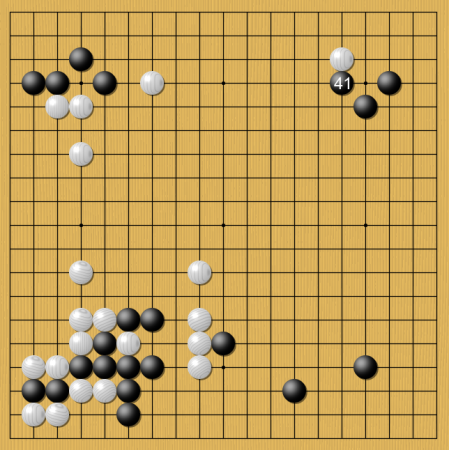 I am referring to this weird kosumitsuke from above.

It seems that neither of my opponents was familiar with this move because they both entered my desired variation without resistance.

My source for this idea is my friend Mr Zhao Baolong 2p who, a few years ago, showed me two positions that he was wondering why nobody played. This move is one of them.

Nobi inward 42 is the most tempting move.

Black’s continuation is hane 43 and cut 45, the key move.

White has no choice but to capture inside 48 and in the end White is confined to a small corner.

White cannot resist with the outward nobi, for the two other stones will kind of die.

(It’s at most a tiring ko which is unplayable at the moment.) 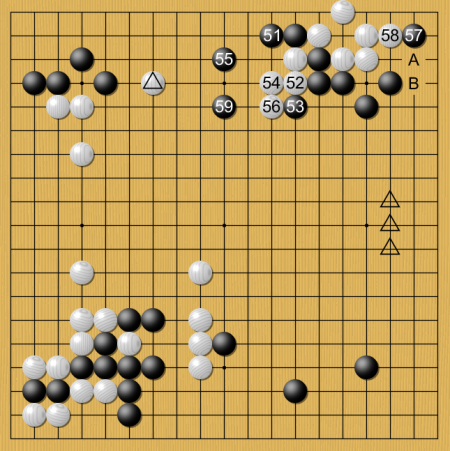 At that time, this seemed like a meaningful fight for Black.

The marked stone becomes isolated, and while chasing White’s other group, the right side likely becomes Black’s potential. After choosing the sente at A or B, White only has 3 points in the corner, so only Black profits from this fight.
(It’s unlike fights in which you have to invest points just to get them going.)

I went on to score a lucky victory in this game and advanced to the top 4.

The karma balanced out in the semifinals (or not?) and I lost:S The next game is from the minifinal deciding the 3rd and 4th places. 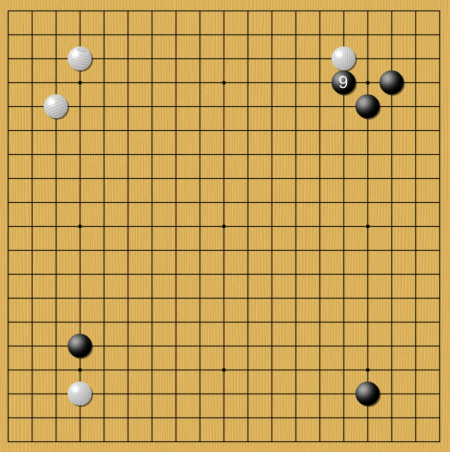 I tried this move again, even though my opponent might have seen the previous game. (He probably didn’t~)

This time, the board is almost empty, so there are no other factors to take into account. 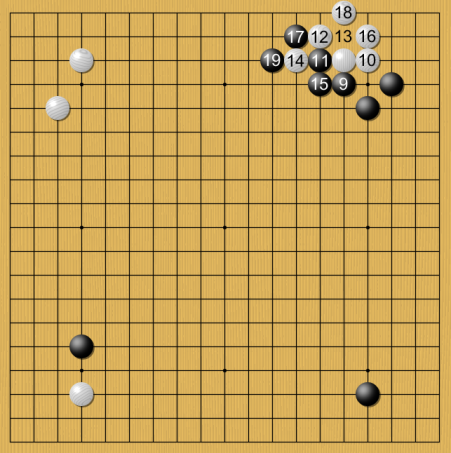 The only difference is that the ladder works for Black, so it’s even better! 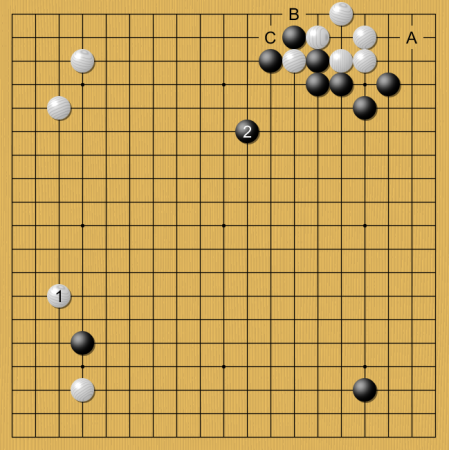 White played a ladder breaker and I almost defended at 2. (I didn’t because I’m an idiot, but that’s not the point for this analysis.)

The slide at A is still sente later.
(Much later, when the corner group is big enough. So White might get to reverse it.)

Anyway, if A is sente, so is B, and there is no trouble at C. (Which implies that defending 2 is better than taking the stone.)

In order to judge this result, we can compare it to a sequence that AlphaGo thinks is even.

(Here, Black has some problems at A or B and White has a sente at C.)

If we put them side by side, the right shape is downright awful for White 🙂

On the right, Black has fewer defects and White’s corner is smaller. (By 5,5 points, go figure).

But what if I told you that you forgot a crucial factor: the move count.

In the left shape Black has 2 more stones whereas Black has 3 more in the right one.
However, I feel that the extra move is more than worth its money. Thus the result in the almost-game is not terrible, but still sort of bad for White.

What should White do then?

My and my opponent’s (inofficial) solution for White is quite trivial:

Don’t play anything at all. Leave this corner up to Black.
(2 is just an example.)

Black cannot do much either.

Hane at 3 is tempting, but however you tewarise this shape, Black has too many stones. and White still has aji with A and B.

Blocking directly is probably superior, but it’s still super overconcentrated. Three moves could be spent much more efficiently than this.

Well, since White isn’t going to play there, Black doesn’t need to either. However, White can induce it by changing the surrounding circumstances with stones around A or B or by preparing the aforementioned ko.

The stone at B would be a direct menace, as in this case White’s nobi 6 works.

The throw-in at 15 works with that extra stone…

…as you can see in this diagramme.

There might be some ladders involved if Black connects at 16:p

In conclusion, this kosumitsuke is a great move if White doesn’t know to tenuki. But even if White does, it can be a powerful option if the circumstances are favourable. 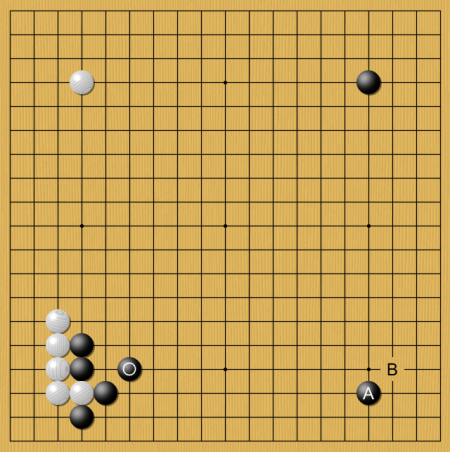 Usually we see the lower-left joseki with the komoku that is not at A, but at B.

Then a strange fight would start that White can handle if White knows the variations. (Though they might be too convoluted, so there must be some blind spots in the sequences.) 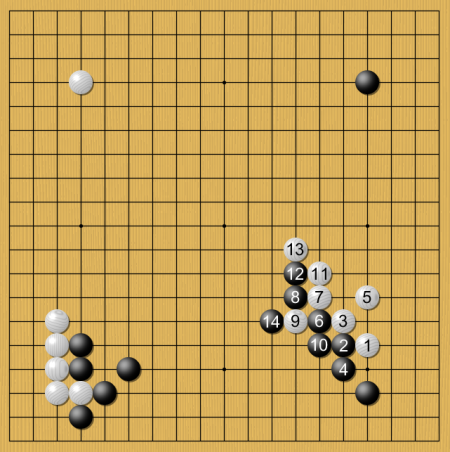 With this komoku, my pro friend suggested to attach the kakari 1 at 2, bluntly surrounding the lower side.

If all of it becomes territory without Black spending a move to extend in the middle, this would be most efficient. But I guess you’d need his tsumego skills to kill any invasion.