At this year’s first Grand Slam, (implying there will be another one in 2017^^,) I lost the first round to a slightly stronger opponent. Although in the end the difference was not very big, in the post-game review I felt like we were playing different games…

There is no denying that my opponent is stronger than me. Our score prior to this game was 1:3 in his favour. (I won the first encounter and then never again:p ever since he came back from the CEGO Academic Programme in Beijing.) His style, however, shows a vast contrast to mine and consists of moves that I would never think of. I.e., he likes very much to attack while I suck at it and prefer a territorial development.

(Game) Playing White, I tried to be smart and played the ladder breaker at 5. Black cannot allow the cut in the upper right to happen, neither can he let White pierce through the extension on the left, so I thought Black would be in the bobo.

Well, Black was smarter and found 6 that handles both sides.

(Game) The further development was far from being an inevitable sequence, but I was not unhappy with the result.

(I have to admit that I thought that A would still be a severe ladder breaker. In reality it does not contribute at all to the ladder and it’s just gote.)

But what about the alternative? 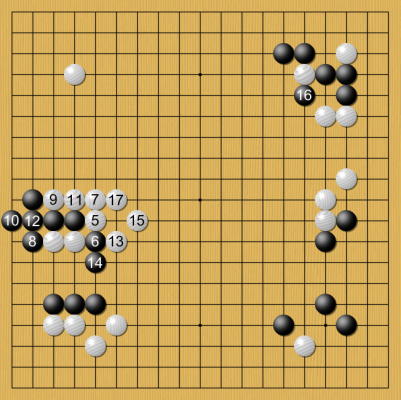 (Variation) After the game my opponent remarked that, instead of the tigermouth 5 in the previous diagramme, White should have wedged at 5. I, however, was much afraid of Black playing atari from inside at 6, and then capturing the stone at 8.
White can then squeeze and take a stone in the centre.

So how would this result be?

Opponent: “Black already had territory there, so White didn’t lose much. The ponnuki is very strong and White can use it to attack later.”

Me: “The left side is still open, White didn’t gain anything here. The upper right is now defended in sente. All White did was increase Black’s territory by 10 points. In gote.”

Regardless of who is right, the exchange was rather amusing. (Probably my opponent is more right than me since he is a bit stronger and also won this game.) This eclatant clash in opinion really shows the difference in style and what it can do to a game.

This happened several times during the review.

(Game) Later on, this position occured and it was my turn to “attack” the Black group. I decided to push at 1 and was surprised that it took him no time to jump out at 2, and I captured the four stones happily with 3.

Opponent: “This is too small. I was happy to jump out and take sente.”

Nice when everyone is happy:p 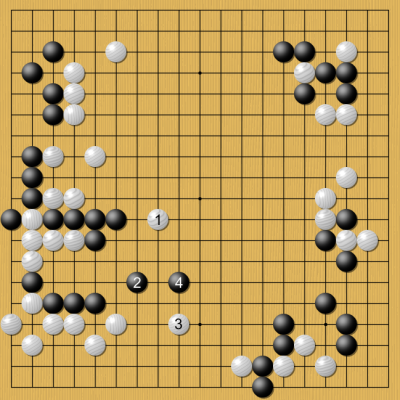 (Variation) Opponent: “You should cap here and attack. I was afraid of this. I have to escape and you can still attack.”

No conclusion reached, even with another 7d joining the review.

(Game) And then, almost immediately after in the game, Black decided to pull out the one stone and prevent (?) White’s ponnuki there.

(Game) The ensuing sequence is inevitable. As a result of the exchanges initiated by Black, he grew some stones in the centre and White increased his territory while reducing Black’s. (With the later monkey jump, basically the two rightmost lines cannot be counted as Black’s territory anymore.)

Me: “Why did you exchange this?”
Opponent: “Black got a wall in sente that can be useful in a fight. White didn’t get so much here.”

Me: “Come on! White got like 5 more and Black has 10 minus. I was very happy about the exchanges.” 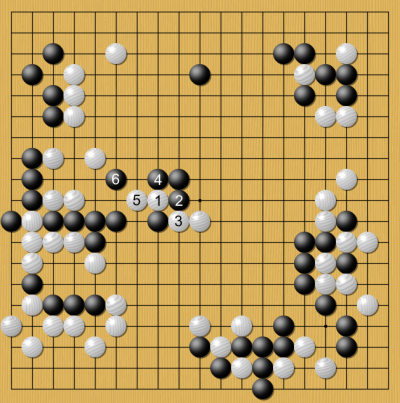 (Game) Finally, White cut through Black’s keima shape. Black cannot capture this stone, so he made a loose geta.

(Game) And White captured one stone and got to block the lower side with the atari at 11.

Here my opponent simply remarked: “You were forced to play here and I got the next move to attack White [in upper left].”

I didn’t respond as I had already given up on the review:S But in reality, I was satisfied with being able to block the side with such a shape. Once White gets sente to connect at A, a huge territory would suddenly appear. (Note that Black wouldn’t be able to extend inside due to the atari-cut.)

This almost happened in the game as Black attacked the upper left group badly. I missed my best chance to tilt the game in my favour when I unnecessarily defended that group in gote when it was already alive T__T
The game became close after that and I probably lost it with a careless sequence in endgame, allowing Black to revive some dead stones in ko.

On the basis of what the players commented, you can see that players who like to attack tend to prefer influence, while players like me tend to go for points. This is valid even among top pro players from Asia.

Well, although I was eliminated after the first round, it is already a great honour to be selected for the Grand Slam as even the last places are rewarded generously. I also got the chance to take a few days off to go to some places in Berlin I should have visited much, much sooner…^^