I didn’t feel well after the game in this round, and afterwards I even encountered some traumatic events in Mahjong (Riichi version). First I dealt into a ryuuisou, a yakuman I had never witnessed before and then another guy got to tempai with the same yakuman. Although I am (in hindsight) honoured to contribute to such a rare hand, the fact that neither of them knew that it was a yakuman kind of threw me off -_-
Amazingly, in another match I made a suuankou (or should I say riizumo toitoi?), so the evening didn’t suck too much.

In any case, I had some accidents during the Bundesliga game: 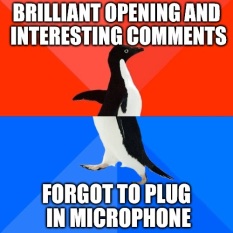 My opponent (whom I have never beaten before) sort of failed in the opening: First he made a brainfart in the lower right corner, and then he gained nothing on the left side. I also made an effort in my comments, and then I realised that the entire time the microphone was not plugged in 😦

I emended this in the second part of the game. This is when I started invading. The ensuing fight contains ups and downs from both sides, ultimately culminating in a tsumego festival. I will not spoil the result here~

At the end of the video my opponent started reviewing the game, which has never happened to me before. He also answered a fuseki question that has been lingering in my mind since more than a year.