In the lower right Black and White have just finished a well-known joseki. With Black’s next move, ordinary mortals would start touching the white hoshi in upper left one way or another. But not Lee Changho! Take a wild guess before you continue reading.

This is my absolute favourite combination of two josekis. Even though I’ve shown it already to many people, this blog just cannot do without it 🙂

Normal people would probably approach at A or attach at B. Lee Changho, however, has bigger ideas.

In the game, Black initiates his master plan by pressing with 1 and 3. 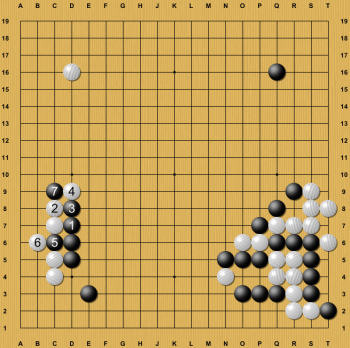 (If you are not Lee Changho, I recommend to hane E9.)

Had White extended at 1 instead of the hane, Black would have pushed and cut. White is in a dilemma: Connecting at 6 would give Black a convenient attachment at A. But capturing with 5 leaves the other side vulnerable to what is shown in the diagramme. Considering that Black can insert a geta at B anytime, the lower side framework is super scary.

And thus, White, making no sense of Black’s plan, forces  Black to crawl all the way to his corner before coming back at 13.

We can see why Black would need the upper left stone to be his, preferably on the third line. Crawling for life like this would be utterly humiliating. 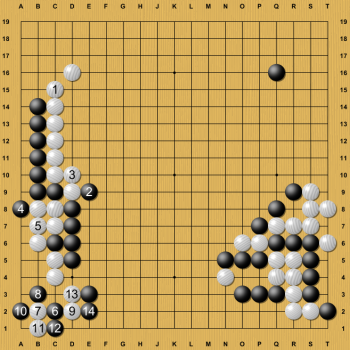 Had White not come back to defend the corner and had he extended at 1, the corner would have got in trouble.

After Black’s slide at 6 and inside hane at 8, the ensuing sequence is a one-way street.

The result (probably one of Black’s worse ones) is a ko. Depending on Black’s mood, Black can choose to geta at A for a few orgasmic ko-threats or to play the nearly infinite kamikaze threats starting at C. (Blocking at B would probably be too small.) In any case, White is toast.

Ergo, White was forced to add a move to the corner. After a few exchanges, Black finally reveals the fruits of his concoction:

Of course Black never planned to crawl for life, but attaches at 7! And White cannot play the most obvious move to block this move, for Black is threatening to ladder two key stones at A!

In order to not collapse completely, White spends a lot of effort to block Black’s way by jumping at 2.

If White simply removes the ladder, not only would the corner stone get annexed by Black, but the centre group would also start floating. What a disaster!

But never had White imagined that Black can attach again! Ladder breaker #2 is no less severe than the first one.

And again White finds a way to somewhat block Black by shoulder-hitting at 2.

When White rescues the group with 6, Black launches ladder breaker #3 with hane 7 and bump 9.

For Black to extend instead of the hane seems satisfactory, but when White inevitably invades the lower side, White’s moves around clamping at A and peeping at B will be annoying to deal with.

Anyway, Black’s move in the game is way better.

Following ladder breaker #3, White has had enough and finally removes the ladder.

The result is no different from Variation 3: Black broke through White’s formation and White became so weak that White could jump no deeper than 7. In the end White’s corner stone was swallowed and the game ended a few moves later.

Some might point out that White can temporarily prevent the ladder by blocking at 2. In this case Black would exchange the jump 3 and still gets to cut at 7.